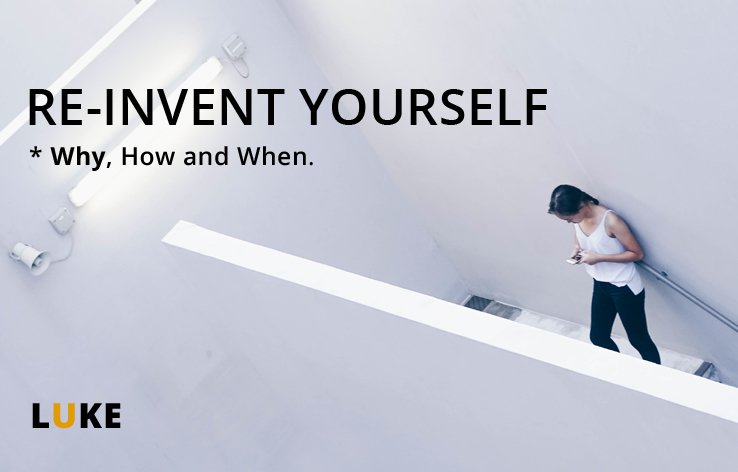 I have this idea that everyone should re-invent themselves at least once every ten years.

When I was younger I would do it every three years. You can pack a lot of interesting things into your life at that rate.

If we do only live once (I’m still Googling that one) then, at least, treat yourself to some variety in your life.

Change your career (if that’s not too scary a thought), move to a different city or even a different country. Do something that terrifies you, shake it up a bit, and throw yourself in at the deep end now and then.

Sometimes, of course, we don’t have any choice and it can be forced upon us through redundancy, downsizing, illness or family circumstances to name but a few.

“Sometimes you just have to jump out the window and grow wings on the way down.” ― Ray Bradbury

In my spare time I’m a blues musician and the first time I played on stage, (‘stage’ sounds a bit grand; it was in fact someone’s garden) my legs were shaking so much I had to lean against my amplifier to stay upright.

It was only a local friends birthday party, but for me it might as well have been Madison Square Gardens.

I was so terrified that when it came to my first solo I thought I was going to die right there, in front of everyone.

My head was so full of all the things that could go wrong and how I was about to make the biggest mistake of my life, right in front of people I knew.

Because if I hadn’t I would have regretted it for the rest of my life.

If I had let self-doubt lead the way I would be sitting here today thinking ‘I wish I could play the blues harmonica and gig in a band’.

Yes you are vulnerable and exposed, but what’s the worst that can happen? If you make a fool of yourself (your friends will forgive you), if the new job doesn’t work out you can get another job and yes, the sun will still rise tomorrow.

Most of us are masters at sabotaging our own dreams! Don’t be a hostage to your own excuses.

I am saying this from personal experience, I’ve been at zero, changed my career, and started a new business many times. My mother no longer asks what I do for a living.

The truth is that, most of the time, what stops us from being who we want to be and doing what we want to do is – ourselves!

Over the years in my business career I have met many ‘successful’ people who are doing what they do for the money, for the exit strategy, for the buyout, and/or because they have ex-wives to pay for but – they hate their job.

I have friends who do what they do because to do something else would risk the lifestyle they are used to and have come to depend on, so they ‘keep on keeping on’.

“The brave may not live forever – but the cautious do not live at all.” – Richard Branson

I have a good friend who has recently retired from (in his own words ‘a long and bloody boring career’), so on the face of it he now has time on his hands to do anything he wants.

He decided to learn to play the blues harmonica.

Within the first week he had read everything he could about harmonicas, he listened to YouTube ‘How to” videos, he read up on the history of the instrument and he bought a couple of very expensive harmonicas.

After one week he could tell me all the blues scales, he knew all the theory, he had listened to all the greats and he was the proud owner of some beautiful harmonicas.

The trouble was that he could not actually play. He had done the easy bit which was driven by enthusiasm, but enthusiasm doesn’t last without passion and commitment.

Within a month his expensive harmonicas were sitting on the shelf like miniature trophies; he was no longer interested in learning and had moved onto something else.

He was very good at starting projects but he never finished them. As soon as the learning curve appeared he stopped and started something else.

Starting is not enough!

If you take anything from this article I hope it is that, with a little courage and a bit of self-belief, you can do a few of those things you have always wanted to do but have managed to find excuses not to.

“In the end, it’s not the years in your life that count. It’s the life in your years.” – Abraham Lincoln

If you do want to re-invent yourself, remember this:

You can start something in a second. You could start it right this minute, but the trick is to keep going and that’s hard.

# Don’t look for the end of the road before you even begin.

That’s all about try to control every step. Try to micro-manage your journey and it will fail. It will also get bloody boring!

# What if my friends think I am crazy?

Then they are not your friends and who cares anyway?

Don’t be limited by the limitations of others.

# What if I have no skills or talents at all?

Then you’re wrong, but not alone.

I’ve talked to many people over the years who have had no idea what they were good at. They believed they had no discernible talents at all when, in fact, we all have infinite gifts; we just haven’t discovered them yet.

It’s gone and it isn’t coming back. There is only forward, so make it interesting.

# Find yourself a mentor, a teacher, a guide.

You will need one.

Someone somewhere has already been on the journey you are about to take. That journey has given them knowledge, experience and valuable insight that will take you years to acquire on your own. Why repeat the mistakes of others when you can learn from them?

Donald Rumsfeld (not a person I would normally quote or even listen to) said at a US Department of Defence news briefing back in 2002.

# Get out of your head and get into the game.

Don’t try to come up with all the reasons for why you can or cannot start. Just start.

‘He who awaits much can expect little’. – Gabriel García Márquez

# Don’t work on your weaknesses!

You already suck at them. Instead concentrate on what you’re good at and get better at it.

# What if I’m perfectly happy doing what I do?

Then stop reading this article – I don’t want to waste any more of your time.

All I can say to that question is – because you can!

Life should be an adventure, full of interesting stories and experiences.

During my life I have been a bus conductor, a shipyard boilermaker, a welder, a plumbers mate, a civil servant, a canasta expert, I created my own publishing company and run my own design company. I have been creative director of the world’s biggest branding agency, a space tourism expert, a blues musician, and a lifelong entrepreneur, as well one or two jobs I’d best not mention in public.

That adds up to a lot of eye watering after dinner stories.

As Hunter S Thompson once said:

“Life should not be a journey to the grave with the intention of arriving safely in a pretty and well-preserved body, but rather to skid in broadside in a cloud of smoke, thoroughly used up, totally worn out, and loudly proclaiming “Wow! What a Ride!”