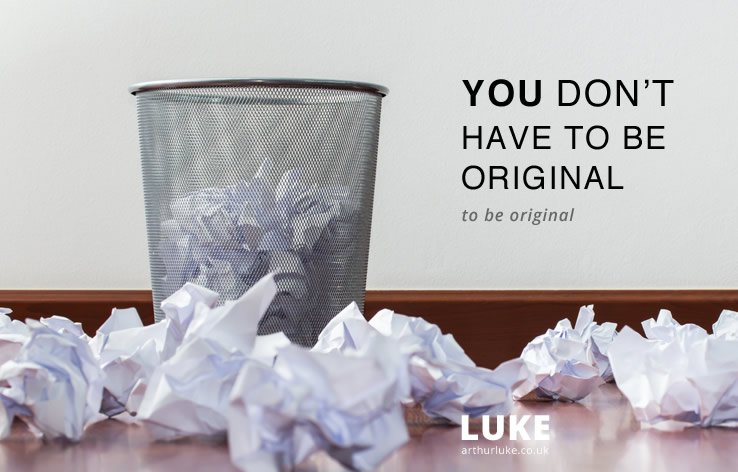 Starting something new often seems too hard to start; the result being that we don’t start at all.

In reality there are over 7 billion people on earth, over 65 million in the UK alone and more than 600,000 of those started a new business last year, so why do we feel our new idea has to be something no one else has thought of?

As a small kid I remember my schoolteacher wrapping me over the knuckles with a ruler every time she caught me glancing at anyone else’s work.

‘Arthur Luke! Don’t copy other people’s work! If I catch you doing it again I will send you to the headmaster’. Panic stricken, I would sit there looking at my empty page and my brain would seize up.

Most of the time I did know the answers but panic would cloud the way and I would sit there unable to think of anything at all. I have been known to hand in my exam paper with nothing but my name on it.

Which is why I failed maths four times even though, at that time, my father was my maths teacher (but that’s a story for another time).

To copy was the ultimate sin and this has been beaten into us at a very early age.

Now, if I am completely honest, a couple of times I was caught copying facts during a test, but only because I’d been too lazy to do my homework. On other occasions I was looking for inspiration…for something, anything, to get my pen moving and get me out of panic mode.

There is a big difference between copying and looking for inspiration, or looking to improve on something someone else has already done.

Unfortunately the idea that ‘copying is bad’ is so ingrained that we tend to apply it to everything we do, to the point that it actually stops us from being creative.

In trying to be ‘original’ we make our goals impossible to reach, and we give up.

As little kids we copied all the time; it was how we learned to walk and talk but, as we get older, copying becomes something we must never admit to.

Don’t let the search for originality stop you from being original.

We ‘copy’ all the time! It’s nearly impossible not to.

What makes the difference is how we individually interpret or re-interpret, reform and reproduce what we see and what we read. It is this unique personal filter (how we as an individual see the world) that makes what we do original, not the idea itself.

We see it, absorb it and through our own individual view of the world regurgitate it as something different, and hopefully better, that will appeal to those it didn’t reach in it’s original form.

“Even in literature and art, no man who bothers about originality will ever be original: whereas if you simply try to tell the truth (without caring twopence how often it has been told before) you will, nine times out of ten, become original without ever having noticed it.” – C.S Lewis

Don’t stop yourself starting by trying to be original JUST START.

Here’s what you should do now

You should have a chat with me, it’s free

You should signup to my new lifesaving, brand-aid series

You should check out my blog articles

You should do all of these things (I can’t force you and I wouldn’t want to).