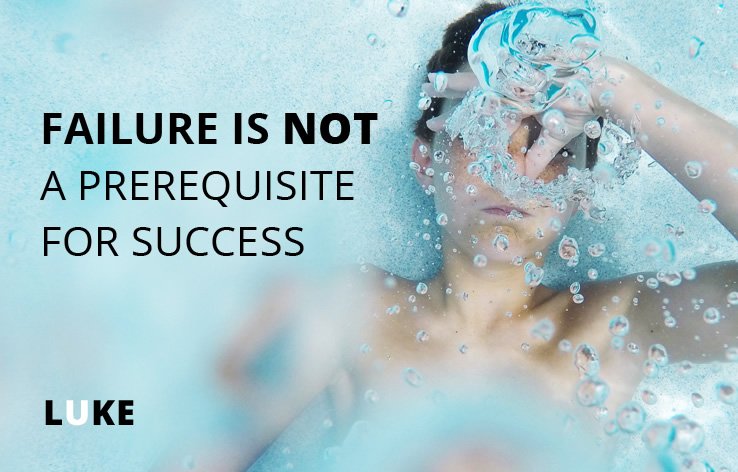 Failure is NOT a prerequisite for success

I know everyone preaches the opposite but I am tired of hearing it.

There are hundreds of articles devoted to listing ‘famous failures’. Household names who failed before they reached success and credit those failures to that eventual success. Such as:

It is as if ‘failure first’ is an inevitable right of passage. Hell, I have even said it myself.

It’s not ‘failure’ we should be praising for success, it is ‘determination, persistence and the ability to learn those experiences’. Failure does not in itself guarantee anything. It is determination rather than failure that drives us to change – the determination to succeed and to try ‘one more time’.
Failure is a potential consequence of the actions you are about to take nothing more. Some people learn from it quickly, some slowly and others not at all.
Of course  success does not come easy for most of us, we face hurdles every step of the way no matter what our goal.

Churchill once said, “Success is based on going from failure to failure without losing eagerness.”

I prefer to read that as meaning success is being able to face up-to and overcome one challenge after another without losing eagerness.

Fear – the good the bad and the ugly

It is true to say that many of us are so afraid to fail that we don’t actually start. But it is also fear itself we fear.

Let’s be honest, starting your own business and making that dream a reality is an exciting but scary thought. Much can go wrong and things will (you can count on it).

It certainly requires belief, boldness and courage – you are stepping into the unknown. But failure is not the inevitable outcome.

Beware of making quotes like ‘the more you fail the more you win’ an easy justification for making ill-considered decisions, poor research and taking bad advice for your new idea not working.

The truth is ‘keep going’.

When Oprah was turned down by executives and told she was not fit for TV she ‘kept going’. When Dyson’s first 5,126 attempts at inventing a bagless vacuum cleaner weren’t successful he ‘kept going’.

Struggle and self-belief are prerequisites for success not failure. So leave the failure quotes where you found them. Treat ‘failure’ for what it is; a potential part of the journey.

The Harvard Business School did a study, which looked at several thousand venture-capital-backed companies from 1986 to 2003. It basically found that, in general, failures are not a particularly effective teacher of entrepreneurship, Professor Gompers one of the study authors said, “absolutely some entrepreneurs can learn” from them.

“There are some talented entrepreneurs who fail on the first time, learn and then succeed,” he said. But, he added, “that is not the rule.”

If you want a quote to inspire you then think on something Coco Chanel once said:

“Success is most often achieved by those who don’t know that failure is inevitable.” – Coco Chanel

Previous Post
Don’t waste money on that new idea!
Next Post
Without it there would be no entrepreneurs