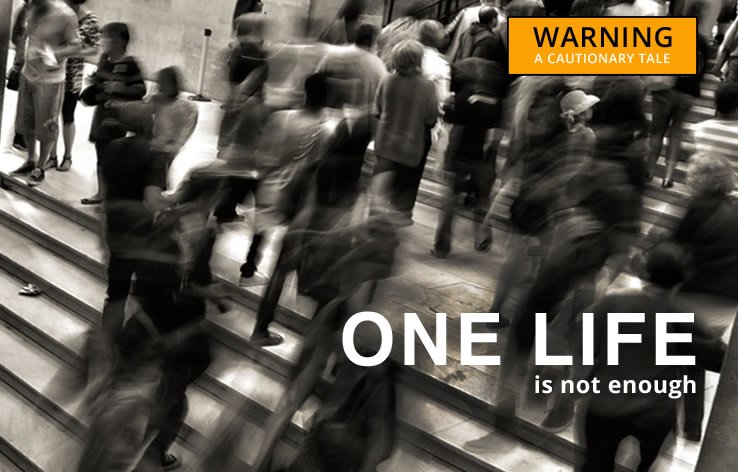 One life is not enough

To say that I am a ‘driven’ person is an understatement.

The reasons behind this drive are too complicated for this article and I would not want to spring it on you without prior warning. You would need supplies of beer and sandwiches, at the very least.

It might even lead you question your own sanity, and would definitely lead you to question mine.

That said, I will get back to the explanation at hand.

It was a time in my life when I was so busy and so driven that I actually became three separate people with three separate careers, all at the same time. Only my long-suffering girlfriend (now my wife) was fully aware of my state of mind (or minds). Somehow I managed to fool everyone else.

I have always had more than one job at a time and have never fed from only one bowl. I think this stems from when I was a child. We lived on rough housing estates where even mediocrity was a wish too far. Evenings by the TV were peppered with drunken shouts from neighbours, along with the smell of urine drifting in from the communal landing (we lived on the fourth floor).

I did not want to end up back there!

Fast forward to the early 80’s. I was creative director of a famous branding agency when things first started to get a little out of hand. I was already working all hours, either in the studio or en route to meetings across Europe.

I had so many projects on the go at any one time that I started hiring friends (designers from other London agencies) to come and work for me in the evenings after they had finished for the day.

At around 11pm I would get a cab home, go to sleep and be picked up again at 6.30am to prepare the next presentation in time for my first client meeting of the morning.

Then, one day, I had a big client presentation to prepare for. It was Friday afternoon and the illustrator I had commissioned to do some visuals let me down badly. I was two days away from the presentation with no presentation.

That weekend I decided to do his work myself and had the 8 illustrations finished and ready to roll by Sunday night.

However, the devil was beginning to stir.

The client loved the illustrations so much that he commissioned another 15. That same week I got a call from another designer friend who had been let down at the last minute by the same illustrator.

What happened next took me 8 years to bring to a close.

I found myself saying aloud down the phone “I know an illustrator who could do it! He has just done’ some work for me in the same style and I’ll send copies over by cab’. ‘What’s his name?’ she asked, and, after a long silence, I heard myself say ‘Mick Moscovitch’.

Mick Moscovitch was born, and to this day I don’t know how I came up with the name but he went onto have a very successful career of his own.

At his peak he was earning more than me and I was paid well.

Apart from commissions for me and my clients, Mick started working for other design and ad agencies. He did work for a lot of famous publishing houses and magazines. During that time no one ever actually met Mick. His work was always delivered and collected by cab.

Our home in Islington had an answering machine which took messages for my girlfriend, myself and Mick. Her friends started asking if she was living with two guys.

One day I decided it was getting too much to handle and Mick needed an agent to manage his career, as usual I sent his portfolio to a well-known illustrators agency by cab and that afternoon I got a call from the guy who ran the agency.

He wanted to know more. I hesitated.

‘Can I ask you about your surname?’, ‘Mmm OK’, I said. ‘Is Moscovitch Russian?’ ‘Polish’ I said ‘right’ he said, ‘but you have a Newcastle accent?’

Once again the devil took over.

“Yes I’m from Newcastle but my parents were Polish. My father worked in the Gdańsk shipyard, they left Poland during the political troubles and moved to the Tyne to work in the shipyards there’ Completely untrue of course but it was all I think of on the spur of the moment.

He then said the biggest piece of ‘bullshit’ I’ve ever heard in my life and the reason personality number 3 was born.

He said ‘Yes’ I can see that struggle in your work’. ‘It’s full of political tension’.

I put the phone down and decided to be Mick’s new agent myself.

He was to be ‘Churchill Spires – illustrators agent’. He needed a name with a certain amount of gravitas. Choosing the right name, as I know from years in branding, is important.

Before long I had other illustrator friends asking if Churchill could be their agent.

One life was just not going to be enough for what I had created.

It all finally came to a head one Christmas when both Mick and I were invited to the same client Christmas party. My girlfriend sat me down and said, “Arthur, this has got to stop, it’s either Mick or me!”

He’d had a good run, he’d had a successful career and he’d made his money, but it was time for him to retire to some desert island. I was jealous. I envied Mick.

Years later I brought Mick out of retirement and he started his own publishing company. But I was getting too old for multiple careers and retired him again two years later.

Is there a point to this story I hear you ask?

My point is, quite simply, that you don’t know what you are capable of until you try.

If you’re in a job or career you hate you can, with a little imagination and energy, do amazing things. If I can create three successful careers for myself all at the same time, just think what you can do.

If you need any help along the way you know where I am and I have loads of suggestions.

By the way if there are any Hollywood producers out there, Mick’s life story would make a great movie.

He was a bit of a wild boy, he got into drugs and other stuff for a while (pressure of success) and we used to hang out together sometimes as we had similar tastes.

I did spend a lot of time with him and got to know all his secrets… Forget Walter Mitty, Mick Moscovitch was the real thing so just give me a call.

I hope this inspires you to think about breaking free from the 9 to 5.