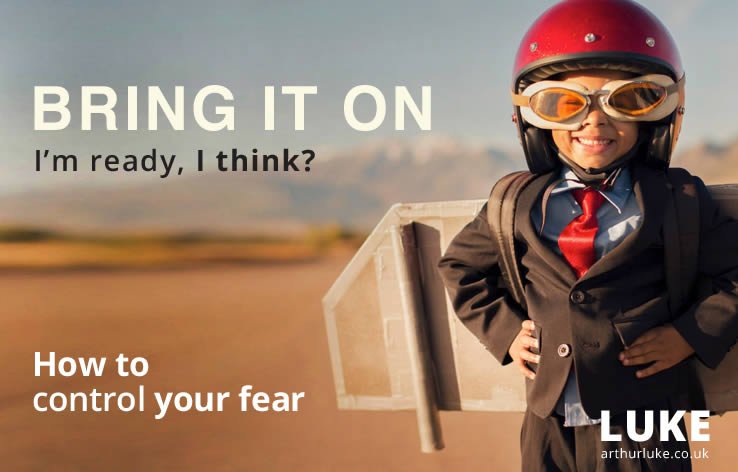 FEAR – Why it’s good for entrepreneurs

What is it that stops us from taking the ‘next step’ that which turns a lifelong desire to start our own business, and be our own boss, into a reality?

Every successful entrepreneur will tell you ‘coming up with the idea is the easy part’- we can all nail that one over a cup of coffee but it is only the start line. The hardest part is overcoming the excuses:

The list is endless and every excuse seems a valid one. The real reason (and you probably already know this) is FEAR. Fear kills more dreams than failure ever will.

“You shouldn’t focus on why you can’t do something, which is what most people do. You should focus on why perhaps you can, and be one of the exceptions.” – Steve Case, co-founder of AOL

So what do most of us do?

We just keep on keeping on, we carry on with a job we don’t want to do, we put that fantastic business idea back in the box to look back on and wish we had had the courage to do it.

For years I had a little black notebook and many of my lunch breaks were spent in the café opposite my Covent Garden studio, listing all the pros and cons of quitting my job.

I tortured myself with this ritual; for every reason I had for starting my own business I had two excuses not to.

This went on for months until, out of the blue, my father died and suddenly everything changed. He was there one minute and gone the next. A seemingly healthy 61 year old who competed in half marathons every year, played squash every week and ran 6 miles every other day. The answer was there, right in front of me.

‘What the hell am I waiting for, life is short’. So I quit the job.

Realising that it was my fear of failure that was stopping me was an important moment in my life, and more importantly, that fear was not going to go away; it would always be there and it always has.

The difference however, between the entrepreneur and the billions of people who ‘just keep on keeping on’ with the day job, is the fear of living with the regret of not following their dream and of not having the courage to take that leap of faith in themselves. Stepping out of your comfort zone and leaving behind all that feels safe is a tough one, I know, I have been doing it most of my adult life.

“I knew that if I failed I wouldn’t regret that, but I knew the one thing I might regret is not trying.” – Jeff Bezos (Founder of Amazon)

I don’t want to be a millionaire

Wanting to be a millionaire has never interested me. It’s life that interests me and, as we spend most of it working why spend it working for someone else or spend it doing something we do not enjoy?

Great success is never achieved without failure; it is a necessary stepping-stone to success. It may be one or a series of failures – such as Edison’s 10,000 attempts to create a light bulb or Dyson’s 5,126 attempts to invent a bagless vacuum cleaner.

“There is only one thing that makes a dream impossible to achieve: the fear of failure.” – Paulo Coelho

Beware of the ‘what if’s’

‘What if’s’ are important in the development of any idea or business; without them ideas lack research and all important product, market and customer data but, if allowed take over, they can paralyse us with fear and indecision. We can spend far too much time over-analysing.

I remember one client (a well known London law firm) who would take months to decide on whether the chapter headings in their new brochure should be red or blue. Every possible ‘what if’ any partner, secretary or spouse came up with had to be tested and proven or disproven before the client made a decision.

Don’t let the pursuit of data or consensus take control; it is fear in a new disguise.

So what’s the answer?

The answer is to embrace the fear. Don’t ignore it, accept it and understand where it is coming from. Define your worst-case scenario and use that knowledge to move forward. Yes you might fail and your first attempts probably will, I have failed many times but it has never stopped me from trying again.

Failure needs to be seen as an opportunity. As Richard Branson says “Do not be embarrassed by your failures, learn from them and start again.”

“I’ve missed more than 9,000 shots in my career. I’ve lost almost 300 games. 26 times I’ve been trusted to take the game’s winning shot and missed. I’ve failed over and over and over again in my life and that’s why I succeed.” – Michael Jordan