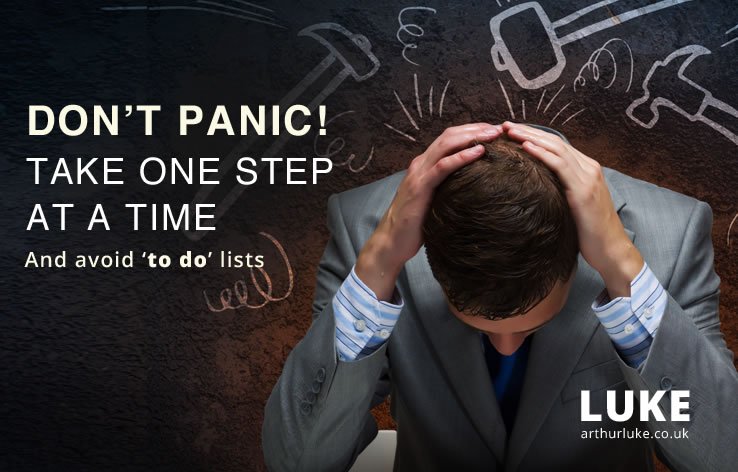 Don’t panic! Take one step at a time.

Taking those first steps towards starting your own business can be both exhilarating and paralysing. The list of tasks ahead of you in those early days can be overwhelming; so overwhelming that we don’t even start.

The mountain looks too big, the cost too high, the skills required too great and the risk too frightening.

Where do you begin? How do you start? The bigger the dream the more overwhelming the list of tasks.

The answer is, of course, one step at a time!

I hate ‘to do’ lists

When I let my ‘to do’ list get the better of me everything grinds to a halt. Fear, panic and self-doubt all rise to the surface.

‘To do’ lists can be good and bad. Lists can change your life if you use them correctly- they do a great job of getting all the ideas for the day, week or month out of your head and onto paper.

The bad news is they are too easy to add to and before you know it the list is so long it seems impossible to tackle anything. ‘To do’ lists can make you less productive. Sometimes it even feels as if your list controls you, not vice versa.

Confession: I have even been known to add a few unimportant tasks to my daily list in an attempt to fool myself that, by the end of the day, I have made progress, when in fact all the most urgent tasks are still there.

I had a flatmate once who was so obsessed with ‘to do’ lists she had them pinned up all over the house. The trouble was she never actually did anything on them. It’s so easy to write a list – but beware the fact that they can be setting you up for failure and frustration.

3 problems with ’to do’ lists:

Lists don’t distinguish between the important and the urgent. Everything on the list is a priority, everything on list is shouting ‘me first’.

‘To do’ lists actually add to your stress. Apparently this is known in psychology as the ‘Zeigarnik effect’, which states that people remember uncompleted or interrupted tasks better than completed tasks. To put it another way unfinished tasks contribute to uncontrolled and intrusive thoughts.

Rather than sweet dreams of a job well done it’s the memory of those unfinished tasks that wake you up in a sweat in the middle of the night.

Social psychologist Roy Baumeister and journalist John Tierney, in their Willpower: Rediscovering the Greatest Human Strength, suggests that a person can typically have up to 150 different tasks at a time

‘To do’ lists do not take time into account. Most of us tend to do the small easy tasks first, whether or not they are the most urgent. Surveys suggest that around 45% of all ‘to do’ lists are never complete.

What is the answer?

I have read many times that successful entrepreneurs don’t use ‘to do’ lists; they use a calendar (a ‘do’ list). This makes a lot more sense to me.

Most of us still need a list to organise our day, to monitor progress and keep us on track, so what can we do to make our list work with us and not against us?

Finally, look at it this way:

If you have a list of 20 tasks to do in a day but in reality you are only ever going to get 3 done, that’s how long your list should be.

Completing 3 out of 3 tasks will make you feel good – you will accomplish what you set out to do and you will make undeniable progress. Complete only 3 out of 20 and you will feel frustrated, stressed and under self-inflicted pressure.