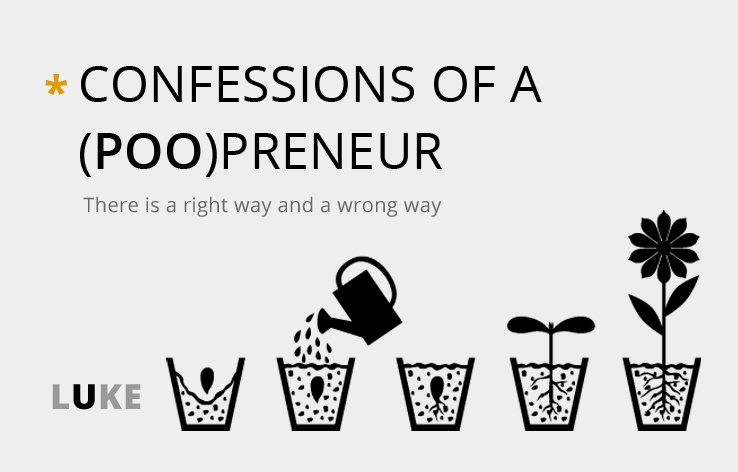 Confessions of a (poo)preneur – a brief tail

Over the years I have started countless businesses, most of them small and some of them successful.

In the process I have learned many lessons about starting a business in both the right and wrong way.

Now, if you’ve read my articles some of you will know that I have spent over 35 years in branding including (trumpet blowing time) the post of creative director of the world’s biggest branding agency.

I have worked for some of the world’s biggest brands as well as the smallest start-ups and you may or may not be surprised to know that they all make the same mistakes.

This knowledge adds a valuable element to my toolkit (that you probably don’t have yourselves) when it comes to launching a new business idea on a budget (and sometimes no budget at all).

Many of my early ideas suffered from over enthusiasm. In other words I let my enthusiasm (which has always been boundless) lead the way. I would rush on ahead of myself, desperate to start ‘creating’.

I would immediately jump head first into the creative process; doing all those tasks I enjoy most. I would assume (or fool myself) that because I thought it was a good idea other people would too.

I would conveniently avoid facing up to the tough question of ‘why’ anyone would want my new idea in the first place and, equally important, whether it would make any money.

Warning: Beware enthusiasm – too little and you will fail, too much can be dangerous. Too little and you will slowly grind to a halt. Too much can make you unfocused, undisciplined and sometimes even take you in completely the wrong direction, clouding your judgement and blinding you to the facts. It can seduce you into trying everything but achieving nothing.

Several of my early ideas relied on other people for skills that were critical to the launch of the business.

This meant that, from day one, I allowed myself to be a hostage to the skill and professionalism of others and, in many cases, total strangers.

In some of my early attempts the timescale to launch was way too long. Too many tasks and man-hours were required just to get to a point at which I could even whether or not there was a market for my new idea.

Sometimes I’d get sidetracked by the unimportant or the wrong priorities. I would spend too much time on the idea before I considered the audience.

I would be seduced by the packaging. In other words I would spend too much time and money or place too much importance on things that were not critical to producing a (MVP) minimal viable product.

Before I get to the actually subject of this article I just want to remind you that when we start a new business for the first time ‘we don’t know what we don’t know’.

Until your new idea can be tested in front of real paying customers you are in the realm of assumption and guesswork, no matter how much research you have done. It’s a fact.

It makes perfect sense, therefore, to spend as little of your hard earned money as possible until you do so and risk as little as you can. This is what I like to call ‘intelligent bootstrapping’.

Most entrepreneurs fail at the first attempt, and the second and the third. It’s better to waste as little money and time as possible at each attempt.

Tip: Eliminate uncertainty. At the beginning of any new business venture there is always a high level of uncertainty. At this stage you are making lots of assumptions about how your new idea/product/service is going to work. These assumptions need to be quickly and clearly defined and tested. By doing this you reduce uncertainty and the risk of failure.

How you start is more important than you think!

Yes, you could just wing it!

Most entrepreneurs will tell you; “It doesn’t matter where you start as long as you start” and I know that’s true but it is also how you start that matters.

Understanding ‘how’ will prevent you from repeating the same mistakes over and over again.

Yes, you could just go with your gut feeling, but is it worth the risk?

Over 90% of new businesses fail, so you owe it to yourself to try and get it right the first time.

Yes, I did say this article was about the confessions of a (poo)preneur so let me explain.

Late last summer I had an idea for another new business and it came to me while I was picking up horse poo.

I had been thinking about what makes the perfect entrepreneurial idea (entrepreneurship is about creating something new out of something others believe has no value).

I wanted to develop an idea that was easy to produce, could be launched quickly, at little or no cost and without the need for outside third party programmers, expensive equipment or software.

I also wanted to be able to test it on real paying customers within a matter of months.

Picking up poo got me thinking. We have a couple of family horses but horses are expensive to keep, expensive to feed and they also produce a lot of poo.

Farmers give horse manure away for free and it stinks. Horse manure is full of weed seeds will burn your plants if you just throw it on the garden so you have to store it for months at the bottom of the garden until it cools down ready to be used in the spring.

On the face of it not the perfect product for a new business! However, it was the perfect challenge for me.

The birth of an idea

After some Google research I found out that Victorian gardeners would make up a rough and ready ‘manure tea’ for there plants by filling a large sack with fresh horse manure and socking it in a large barrel of water.

The goodness from the manure would gradually see into the water creating a liquid plant feed.

The exact production process (the secret sauce, the liquid gold) is now a well-guarded family ‘secret’.

At the cost of £40 (GPB) I had some sample tested at a lab and, hey presto, we had a raw product that was full of nutrients for the garden.

What’s in a name?

A hell of a lot as it happens’.

We now had a product but no name, no packaging and no customers.

Deciding on a name for your business is, I have to tell you, one of the tough ones. Get it wrong and you may regret it for many years to come but don’t get stressed about this. It’s not rocket science.

We wanted a name we could trademark, a name we could get a .com domain, a name that was memorable and if possible had some humour in it (especially as I had a feeling customers might need a little persuading).

After doing some initial trademark searching and domain availability we decided on ‘WhinnyPoo’ with a tagline of ‘Nurture Nature, Natually’.

The product became ‘WhinnyPoo Manure Tea’ money spent so far – under £270 (including the cost of buying the trademark, the domain and hosting for the a website and the initial lab sample test).

The birth of a brand

The next step was to source some biodegradable bags, print some swing tags to for each bag, rent a test stall at our local farmers market for the day (£15) get a 6ft banner printed with our logo and strapline on it and we had a product ready to put in front of real customers.

Our first market day was a real success, we got a chance to:

And we sold 28 bags of WhinnyPoo tea on a cold Saturday market day.

‘28 bags – is that all?’ I can hear you say, but in terms of testing the market and being able to confirm our hopes that we were onto something good it was a massive success.

Briefly: We are now 8 months on and we have already extended our product line based on real feedback from customers.

Tip: If you are struggling to expand your product range, listen to your customers face to face if you can. They know may not know what they want but they do know what they need.

We have used our very small budget wisely on stalls at a couple of big gardening fairs to spread the word about WhinnyPoo. We have picked up a couple of wholesale customers, as well as individual customers both at our market days and online including a new recent order from the Royal Botanic Gardens at Kew in London.

Everywhere we go people love the product, the branding, and the design. It all came from picking up poo and ignoring those friends who thought I had gone crazy (“why would anyone want to buy poo tea” they said).

Note: I will go into this story in more detail in an upcoming podcast, it’s too good not to.

By the way if you’re a gardener you need some WhinnyPoo. You can check it out at whinnypoo.com (sorry, couldn’t not resist trying to sell you some).

Whatever the reason an hour with me could save you a year of lost opportunities, unnecessary expense and costly mistakes.

Previous Post
It’s simple. Get out of your own way!
Next Post
Should I stay or should I go?